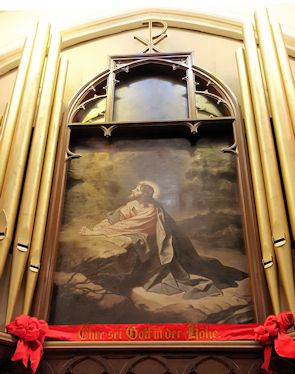 The ambiance of a beautiful and historic sanctuary, the familiar carols and music, the sound of the language as the story of Christmas unfolds, all add up to a one-of-a-kind experience for the soul, something that often gets lost in our modern day and commercialized observance of Christmas.

The congregation of St. John's United Church of Christ, assisted by the Monroe Swiss Singers, annually offers this beautiful Christmas Communion service conducted entirely in German. Rev. Todd Hackman, along with the congregation, welcome all to the ecumenical service.

Featured in 1997 in the Wisconsin State Journal, and one of the few of its kind in the state, the service is rooted in the early traditions and heritage of St. John's Church, which was founded in 1862 by Swiss and German immigrants. Services were conducted in German until the 1920s, with the Christmas Day communion service continuing until 1955. With the musical assistance of the Monroe Swiss Singers, the current German service was reinstated in 1972 by the Rev. Wolfgang Koehler, a German native who served the church from 1969-1981. Following Rev. Koehler's retirement, a number of German-speaking pastors led the service, primarily the Rev. Erwin Pegel, a native of Bad Salzuflen, Germany, who served Zwingli UCC in Monticello, WI until his retirement from fulltime ministry in 1995. From the mid-1980s through 2004, Rev. Pegel and his wife, Dora, also a native of Germany, led the annual service. In 2009, the service format went to one of a Festival of Nine Lessons and Carols, with native speakers of the Monroe Swiss Singers reading the scriptural lessons.

The red-bowed banner (right) above the altar, Ehre sei Gott in der H—he, has proclaimed "Glory to God in the Highest" during the Advent and Christmas seasons for decades, reminding all of the faithfulness of St. John's Swiss and German forebears. Karen L■—nd Fowdy (left) was born in Denver, Colorado, and grew up in Wyoming. She spent her junior year in college in Vienna, Austria, and upon graduation, received a Fulbright Scholarship to study in Berlin, Germany. After three years of study and work in Berlin, Karen returned to the U.S. to earn a Master of Arts Degree in German Literature from the University of Colorado, and secondary teacher certification from the University of Northern Colorado. She taught German at Monroe High School and Monroe Middle School from 1987 - 2011. As founder and advisor for the Monroe High School German Exchange, Karen has hosted German school groups and traveled with Monroe students since 1989. She is one of the authors of Planning Curriculum for Learning World Languages, published by the Wisconsin Department of Public Instruction in 2002. 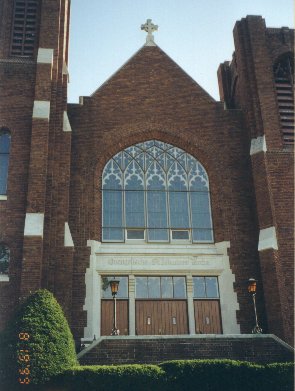 Karen spent her early years in the Denver home of her Swiss grandfather, Albert L■—nd, originally from Rothenthurm in Canton Schwyz, and grandmother, Rose Schmidt, the daughter of Bavarian and Swiss immigrants. Her early memories are of people singing and playing Swiss and German music. Her grandparents were active in Swiss singing and dancing groups and her grandmother and great aunts played the zither. Karen joined the Monroe Swiss Singers immediately after moving to Monroe, where she feels extremely fortunate to be able to carry on the Swiss traditions from her childhood and share them with her family and students.

Karen lives in rural Green County with her husband, Mike. They have three grown children: Michael, Lara and Dan.

An English translation of the entire service is provided. Following the service is a time of fellowship and refreshments. For those with mobility concerns, the sanctuary is accessible by elevator with an entrance on the east side of the building.

More information is available by contacting the church office at 608-325-2165.